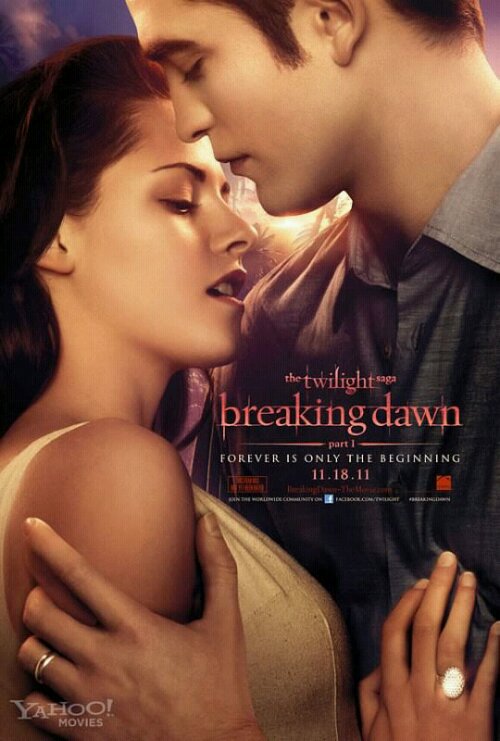 Yes, I was one of the ravening hordes that madly scrambled to a 7pm showing of the highly anticipated fourth entry to the Twilight Saga. I was going to wait until after I’d seen the movie again to make commentary about it but I decided that a fresh take was the best.

I’m one of those people that gets caught up in a movie even when it’s not the best film. This movie was no exception! I was immediately swept up into the emotional, weepy wedding scenes at the beginning of the movie. From the Bella’s pre-wedding jitters, to the vows, to the embarrassing roundup of post wedding speeches… I wish I’d bought a hanky for it. I enjoyed it thoroughly. Many reviewers have written that they thought it all went on a bit too long but it was everything fans could have hoped for.

After the wedding things dragged a bit. Though the honeymoon had some funny bits, the bid to keep these movies firmly in PG-land put any hope for sexiness out the window. Plus, as any reader of the series knows, the honeymoon is the beginning of one of the creepiest and arguably, most graphic, parts of the whole saga begins.

Once the couple are aware of imminent danger and make their way back home, the movie starts picking up steam, though it still remains the most talky of the series so far. There are some graphic bits towards the end but again nothing that’d be too much for most tweens. The movie ends with a perfect cliffhanger… but make sure you hang out past the closing credits: Aro has something to add to the proceedings.

I felt, overall, that the movie was faithful to the book in a way that the previous movies weren’t, while adding some signature touches that could only come from these particular actors (Billy Burke especially). I’m looking forward to the next installment, mostly because I’ve felt all along that the film version of Bella is stronger and more interesting than her written counterpart and she really gets to come into and understand her own strengths. Plus, who doesn’t want to see a hundred vampires squared off for battle? Should be fun!

The movies of these books have all been bad but also totally enjoyable, increasingly so, actually. I would totally recommend it… though I probably don’t need to. 🙂

Have a Friday-like Monday, y’all. I’ll catch you tomorrow with a totally inspiring room!

Fresh from the Press