I love black doors! The first time I realized I was leaning towards this was when I saw an article in Elle Decoration about an art collector and her husband who’d redone the interior of an old Victorian in a completely modern style. The floors, trim, and doors were a deep, glossy black and the walls were a super bright white. The whole place was flooded with light and the colorful art stood out beautifully. Ever since then I’ve been a fan of the look. 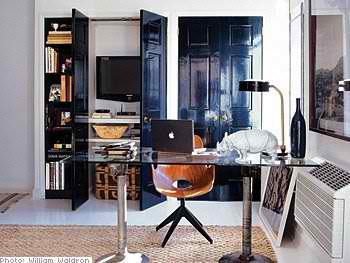 Nate Berkus did the doors of an apartment of his  featured in O a couple of years back a blue so dark that in some photos it read as black.

The entry of designer Michael Bargo’s apartment from the last issue of Domino Magazine.

But my favorite of all time was the apartment of twentysomething designer, Michael Bargo, for the Domino issue on style at every age. His whole apartment was totally gorgeous – and featured black doors!

Here are a few more examples of totally cool black doors and entries. 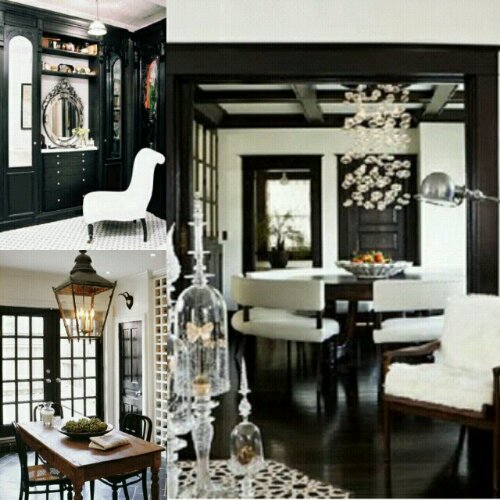 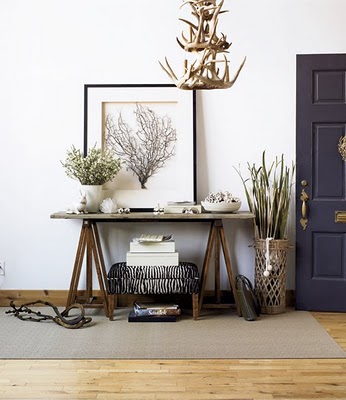 A black door peeks out of the corner if this inviting and contrasty entry. (source unknown) 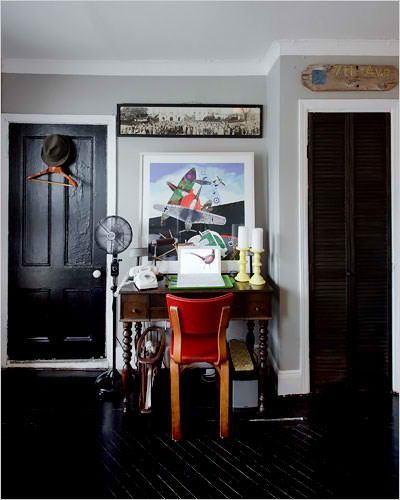 Zach Motl’s micro sized apartment proves you can do dark colors in small spaces. From NYTimes.

What are your favorite colors for interior doors? Have a colorful Monday!

Wow. You want to talk about a success story? How about Zach Motl, an actor turned interior designer. His 178 sq. ft. (!) apartment was featured in the New York Times… after landing a gig with prestigious design firm, Robert Couturier & Associates, without the requisite experience (three years design experience and AutoCAD) for the job. How? He showed them what he’d done to his apartment. That’s can do!

The office area features a desk he got when he was twelve and a $10 antique leather chair.

More pics are available on the slideshow at NYT.com.

Fresh from the Press